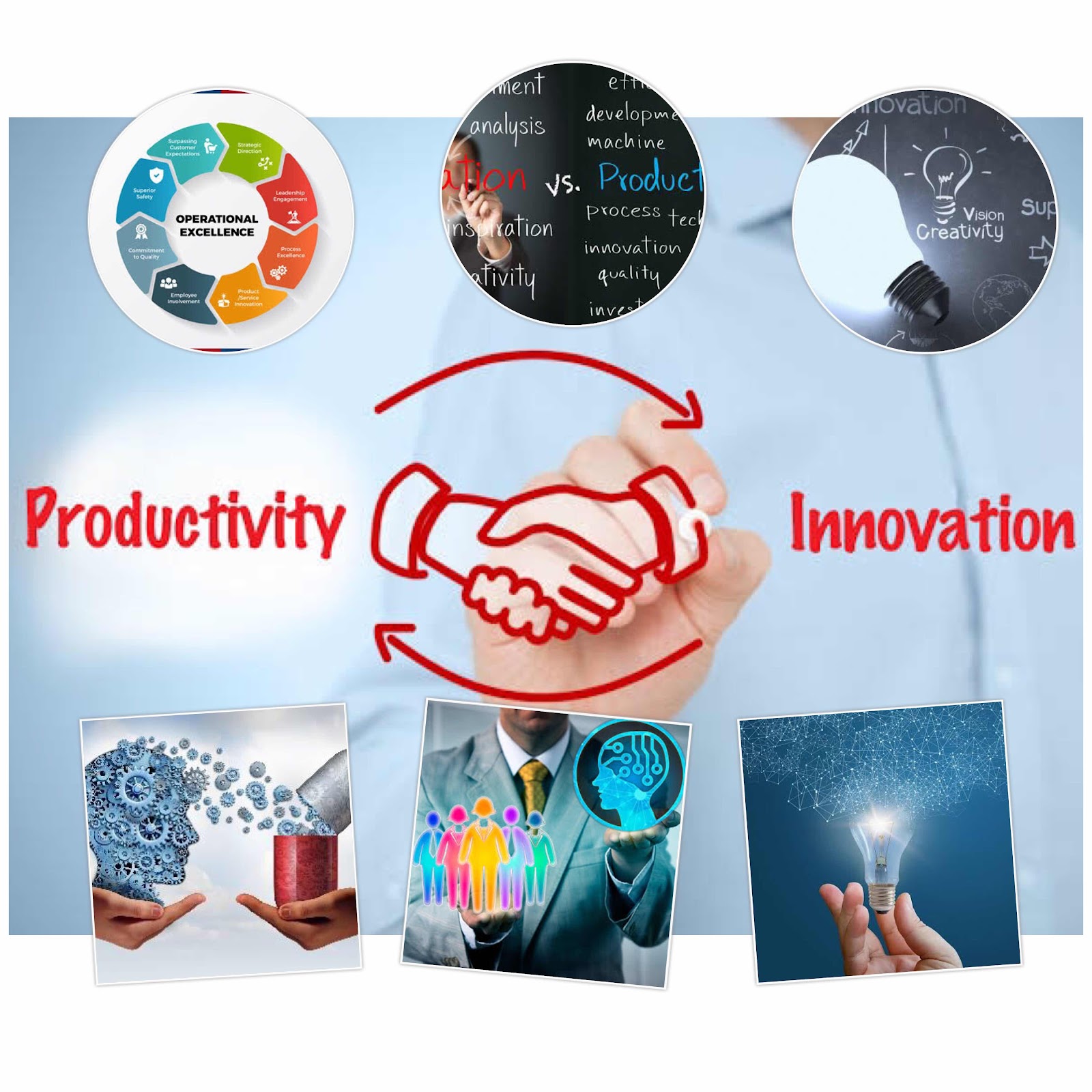 We have been talking of how corporates need to innovate.... innovation comes from people who think differently - the misfits.....

Is there a place for misfits in an enterprise ?

I mean look at the stats - there are many creative “geniuses “ running around The Valley and Incubators around the world -  the reality is that 9 out of 10 start ups end bellyup...

It’s difficult to create a structure or organisation around these humans and innovators - it’s actually counterintuitive to the way they operate or want to operate.

“Here’s to the crazy ones, the misfits, the rebels, the troublemakers, the round pegs in the square holes… the ones who see things differently — they’re not fond of rules… You can quote them, disagree with them, glorify or vilify them, but the only thing you can’t do is ignore them because they change things… they push the human race forward, and while some may see them as the crazy ones, we see genius, because the ones who are crazy enough to think that they can change the world, are the ones who do.  — Steve Jobs, 1997”

No matter how brilliant your product or service or innovation is - without a process to capture their genius it is just chaos.

A culture of team and encouraging misfits, genius and brilliant jerks ….. Is their a place for both ?

Israel-linked solar firm to light up 87,000 homes and businesses in Burundi 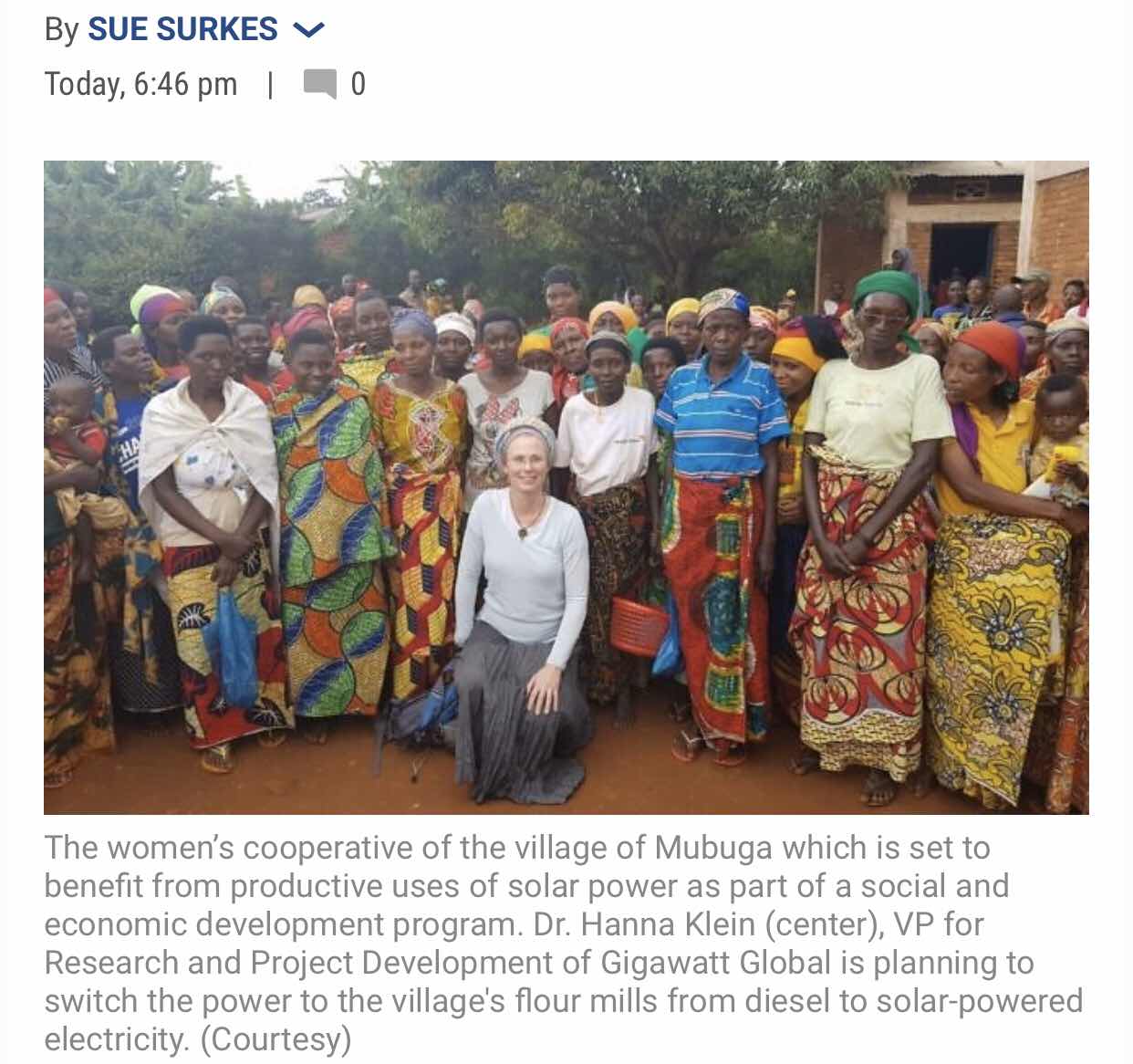 Set on contracts for 10 renewable energy projects in Africa this year, Gigawatt Global follows up Rwanda mission with new 28-acre solar field in one of the world’s poorest nations

Entrepreneurs Programme - if you turnover between 1.5m and 10m - you could be eligible

Finland’s homelessness is in decline 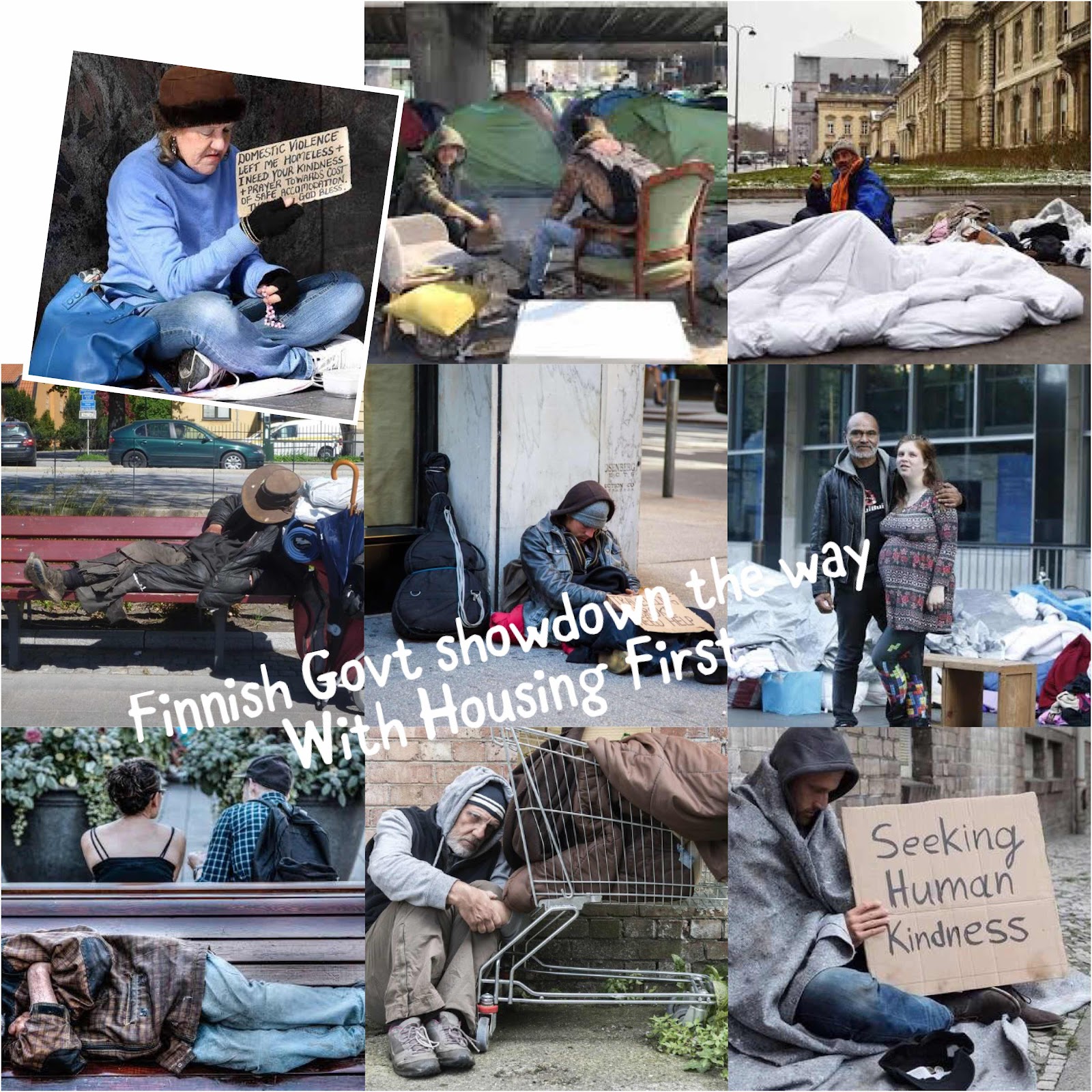 Finnish homelessness is on decline as the country applies the “Housing First” concept.
Those affected by homelessness receive a small apartment and counselling – without any preconditions. 4 out of 5 people affected thus make their way back into a stable life.
And: All this is cheaper than accepting homelessness.
In 2008 Helsinki had tent villages and huts standing between trees in its parks.  The Homeless couldn’t find jobs – without a housing address. And without any job, they couldn’t find a flat. It was a vicious circle. Furthermore, they had problems applying for social benefits. All in all, homeless people found themselves trapped.
In 2008 the Finnish Government started introducing “Housing First”  and has set a vision

Housing and counselling - and no preconditions
The NGO -  “Y-Foundation” provides  housing for people in need. They take care of the construction themselves, buy flats on the private housing market and renovate existing flats.
The apartments have one to two rooms. In addition to that,  emergency shelters have been converted into apartments in order to offer long-term tenancies.
Homeless people turn into tenants with a tenancy agreement. They also have to pay rent and operating costs. Social workers, who have offices in the residential buildings, help with financial issues such as applications for social benefits.
Y-Foundation receives discounted loans from the state to buy housing. Additionally, social workers caring for the homeless and future tenants are paid by the state.
The Finnish lottery supports the NGO when it buys apartments on the private housing market. The Y-Foundation also receives regular loans from banks. The NGO later uses the rental income to repay the loans.
“Housing First” help Homeless people get a flat – without any preconditions. Social workers help them with applications for social benefits and are available for counselling in general. In such a new, secure situation, it is easier for those affected to find a job and take care of their physical and mental health.

The result is impressive: 4 out of 5 homeless people will be able to keep their flat for a long time with “Housing First” and lead a more stable life.

In the last 10 years, the “Housing First” programme provided 4,600 homes in Finland. In 2017 there were still about 1,900 people living on the streets – but there were enough places for them in emergency shelters so that they at least didn’t have to sleep outside anymore.

Creating housing for people costs money. In the past 10 years, 270 million euros were spent on the construction, purchase and renovation of housing as part of the “Housing First” programme.
However, CEO of housing first, Juha Kaakinen points out, this is far less than the cost of homelessness itself. Because when people are in emergency situations, emergencies are more frequent: Assaults, injuries, breakdowns. The police, health care and justice systems are more often called upon to step in – and this also costs money.
In comparison, “Housing First” is cheaper than accepting homelessness: Now, the state spends 15,000 euros less per year per homeless person than before.

No miracle cure – but a high success rate

With 4 out of 5 people keeping their flats, “Housing First” is effective in the long run. In 20 percent of the cases, people move out because they prefer to stay with friends or relatives – or because they don’t manage to pay the rent. But even in this case they are not dropped. They can apply again for an apartment and are supported again if they wish.
Of course, there is no guarantee for success. Especially homeless women are more difficult to reach: They conceal their emergency situation more often: They live on the streets less frequently and rather stay with friends or acquaintances.
In case of new replublication, please cite Kontrast.at/Kathrin Glösel as the Source/Author. The rights to the content remain with the original publisher.
Posted by Ivan Kaye at 4:06 PM No comments: 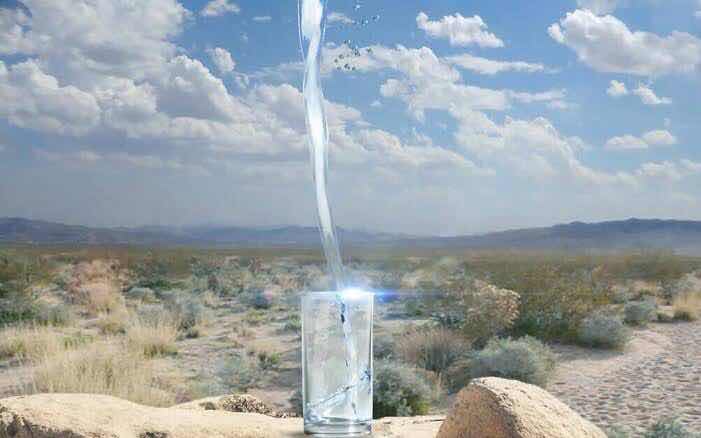 Genny produces up to 30 liters of potable water for a home or office every day – significantly reducing plastic usage and disposal by eliminating the waste caused by drinking bottled water.

How does it work?

After the air is sucked in and chilled to extract its humidity, a built-in blower draws air into the system’s atmospheric water generator. There, an internal filter cleans the air by removing dust and dirt. Once clean, the air is directed through the GENius heat exchange and cooling process, and condensed into water.

The water is then filtered to remove impurities and add minerals, resulting in fresh, drinking-quality water. Once produced, the water is continuously circulated in a built-in reservoir to preserve its freshness.

GENNY also has the potential to serve as an air purifier, circulating clean air throughout homes through a small tweak in the water generation process, using the already existing technology to create a multipurpose product.

The vision - to help people become more environmentally aware, and supported by its Chairman -  philanthropist Mikhael Mirilashvili, the Company has  set its sights on expanding its renewable and energy-efficient clean water solution to the 2.1 billion people worldwide who lack access to safe water at home.

Last year, Watergen’s large-scale system was donated to authorities in Brazil, Vietnam and India. It also assisted rescue and recovery efforts during the 2018 California wildfires and provided clean water to the residents of Texas and Florida in the aftermath of the devastation caused by hurricanes Harvey and Irma.

The large-scale version, called Gen-L, can produce up to 5,000 liters of clean water a day, requiring no infrastructure other than a standard electricity supply.

According to the company's website, it is “perfect for villages, off-grid settlements and factories.”

“My first priority is not how to make money but to help people, the planet and make [a] kiddush hashem [sanctification of God’s name],” said Mikhael Mirilashvili

Referron V 2 - instructions in under 2 minutes


Download referron - easy to sign in - update your profile - send your business card - Refer a person to a business you know like and trust . - Track your connection and referral activity - All within 3 taps
Posted by Ivan Kaye at 8:16 PM No comments:

Is the aging population an issue or an opportunity?

Age expert, Jon Werner,  who runs a virtual accelerator, called silver moonshots, focussing on solving issues for the older adult, pointed out that 65 is the new 70... with life expectancy now about  75-85 (a few 100 years ago it was 50! ).

#work  #innovation around #health #finance #education, #housing, #mobility #entertertainment and being an #olderadult is changing

John pointed out an interesting bbc article  alking about the untapped potential of the longevity economy, written by Mari Shibato -

Highlights from this article

The Aging  Population is growing

The population aged 65 and older is growing faster than all other age groups, and global birth rates has been plummeting since the second half of the 20th Century (except in Africa)

The Boston Consulting Group projects that by 2030, the 55-plus population in the US will have accounted for 50%  all domestic consumer spending growth -  67% in Japan and 86% in Germany.

Ageing has generally been considered detrimental to a country’s economic health, since it reduces the workforce and increases burdens on healthcare systems.

At this year’s G20 meeting in Japan, Bank of Japan Governor Haruhiko Kuroda said that an ageing population could pose “serious challenges” for central banks with governments around the world concerned about public systems of health care, pensions and social protection for older persons  blowing out as the population of retirees will increase.

How can we “unlock” the World’s Fastest-Growing, Most Misunderstood Market.

As the population of elders increases and become healthier - this longevity should be a massive asset to society  . This is  a group of consumers, workers and innovators - who can still be active contributors to the economy.

KPMG’s 2017 report of online consumers in 51 countries revealed that baby boomers spend the most online at $203 on average per transaction, compared to ‘tech-savvy’ millennials, who actually spend the least at $173 on average.

Workers are living healthier, longer lives, and an ageing workforce can be an opportunity to reap what consultancy Deloitte calls the ‘longevity dividend’ – being able to boost economic productivity from older employees.

In Germany, more than 21% of the German population is older than 65 - who are being helped by improved work conditions, improved econometrics at work and  advances and support by AI, and VR - reducing the physical demands of the manufacturing process.

Giving jobs to the younger generation

Looking at the demographic shift, the work of the 21-65 year olds seems to be cut out for them - focussing on “looking after the 0-21 and 65 plus aged groups.

The 21-65 workforce will be shifting from a “manufacturing workforce” to a “service workforce” - making for a better planet.

The universe seems to maintain its perpetual balance and flow !